You make an ass out of u and me! In other words never assume because it’s bad. That’s exactly what my midnight idea is all about. Let’s assume…you write stuff down on a piece of paper but there is no shredder nearby and you are to lazy to eat it/burn it etc. How do you make sure the stuff you wrote down, doesn’t get into someone else his hands and if it does that it’s totally useless to them? Well for that I had the following midnight idea…just suggest them some wrong information!

So the idea is simple I’ll demonstrate it with numbers cause those  they are the easiest…but it’s also doable with letters. Look at the following image: 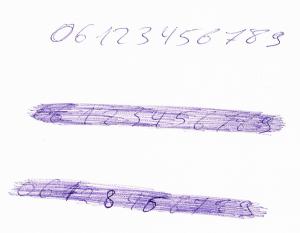 The first line is just the text as you would write it down. The second line is how most people hide their written stuff. The third line is the power of suggestion.

If you would only see the last line you’d imagine the number is: 06128456789 or 06128466789 if you really can’t tell the difference. You all probably think…WTF this is lame. You could probably argue it’s lame…but it’s really nice when you need it. Just imagine someone finding a piece of paper and being thrown off by 1 digit or by 2 or 3. ONLY because they didn’t take the time to verify what they are seeing and they just ASSUMED that the number they think they are seeing is correct. The reason they assume is because no one ever thinks that the data has been modified BEFORE it has been stroked through.

Now if you ask me how this could be usefull in the real world…I got no clue to be honost. It’s just nice to introduce wrong information when you leave things behind. Could maybe come in handy if someone wants to investigate you and they forget to use inkt removers…they would end up spending a lot of time and money tracing the wrong number. Only way this is usefull I think, is if you are in a real hurry and are forced to leave a snippet of paper behind with information on it…instead of just striking through it…first change some characters and then strike it through.

In the end it’s all about satisfying the curiosity of someone. If a person thinks he has got the answer he is looking for, he will stop looking any further. So all you have to do is make him THINK he has the answer.

Anyways this was just some random midnight though that popped into my head and I thought why not share it. Hope it’s usefull to someone, if it’s not oh well…

One thought on “The power of suggestion”