So one day you wake up and you think…why should I buy an alarm installation if I can just make my own. The normal answer is because you usually don’t have the skills nor the time for it. In my case I preferred the answer, because you can learn new skills and do cool stuff. Well that motivated me so here I am writing about how I build my first amateur laser alarm(which is far from finished). Keep on reading if you are curious about my first steps into the hardware world.

First of all…laser alarm is not my idea I’m just shamelessly trying to implement a book example and maybe even improve it. This book series really rocks, it’s the “evil genius” series and even the title is funky. The link below is like an overview of all the books in the serie I think.

I was tempted to buy them all but you know the drill…bad economy so no money. So here are the books I purchased instead(keep in mind I’m a complete n00b on the electronics area):

The one I definitely recommend is “circuit building for dummies”. It explains electronic stuff in a nice and understandable way. Specially the part about current and all those things. So let’s start with the project(or at least the first baby steps). It’s not going to be a walk through…cause else people won’t learn I’ll only highly the main problem(s) I stumbled upon.

First let’s start with the idea and what the goal is…even if we don’t achieve it right away:

Building a beginners laser alarm system which texts or calls you when someone trips the alarm. It must have the possibility to be disabled and enabled by the correct user. It would also be nice if it would not be possible to circumvent it.

What is a laser alarm? A laser alarm is a alarm which goes off when some one interrupts the laser beam. You know like in the movie entrapment: 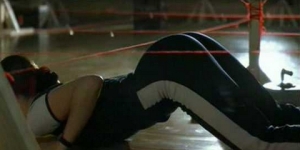 It consists of a laser beam and a receiver, when the receiver notices that the beam gets interrupted it goes off and you are in big trouble.

After catching up with the basic rules about current calculations and how to read schematics I went on and TRIED to read the laser alarm schematic in the book: 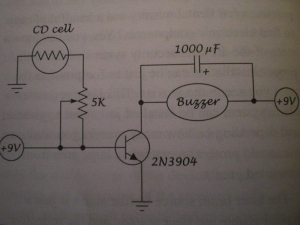 Now that looks pretty simple uh? For the advanced amongst us…try not to laugh when I tell you it took me a whole week to figure it out! Well to be honest I think I never figured it out, cause my final breadboard design doesn’t look like the design in the picture above, but it WORKS! So what where the main pitfalls when trying to build this on my breadboard?

The first problem I solved by trial and re-reading the book which explained how to measure stuff. So there isn’t really a shortcut for that one, just keep on practicing.

The second problem took me the most time…cause for some odd reason I wasn’t able to visualize the working of the transistor. I finally found the following page though which really saved my ass:

So now that the second problem was solved this is how it looks(the laser pointer is just to show that I use an ordinary laser pointer…nothing fancy, of course it doesn’t belong on the circuit):

So that is my finished circuit. Now you might be wondering…wtf does that cell phone do next to the circuit? Like I mentioned before…I want to be notified if someone trips the alarm. So my next step was/is/will be to connect the cell phone to my circuit. My first thought was to have it text me, but that seems to be more complicated then I had anticipated. So luckily I found a website how to modify a cell phone so that it calls a pre-programmed number. Which in my case is more usefull then a text message because if the alarm calls me I can answer the call and listen live to the sounds in my house.

So that’s it for now…hope you enjoyed it and I will keep you guys updated if I manage to connect the phone and finish this project.

I just wired an old phone to speed dial using a relay(or w/e the English word is) this is how it looks like:

So all I need to do now is buy a relay and connect it to my already build circuit. If everything goes correctly the alarm system should call me when the laser beam gets interrupted. To bad I’ll have to wait till tomorrow cause the stores are closed at this moment :(

The last problem remaining after this is the system to activate or deactivate the alarm system. Should I go with traditional stuff and use a number-keypad or should I go wireless with RF or something?