By now everyone has probably heard of Quantum Insert NSA style, if you haven’t then I’d recommend to check out some articles at the end of this post. For those who have been around for a while the technique is not new of course and there have been multiple tools in the past that implemented this type of attack. The tools enabled you to for example fully hijack a telnet connection to insert your own commands, terminate existing connections or just generally mess around with the connection. Most of the tools relied on the fact that they could intercept traffic on the local network and then forge the TCP/IP sequence numbers (long gone are the days that you could just predict them).

So it seems this type of attack, in which knowing the sequences numbers aids in forging a spoofed packet, has been used in two very specific manners:

There is a third option however that hasn’t been explored yet as far as i know, which is using this technique to bypass IP filters for bi-directional communication. You might wonder when this might come in handy right? After all most of the attackers are used to either directly exfiltrate through HTTPS or in a worst case scenario fall back to good old DNS. These methods however don’t cover some of the more isolated hosts that you sometimes encounter during an assignment.

During a couple of assignments I encountered multiple hosts which were shielded by a network firewall only allowing certain IP addresses to or from the box. The following diagram depicts the situation:

As you can see in the above diagram, for some reason the owner of the box had decided that communication with internet was needed, but only to certain IP addresses. This got me thinking on how I could exfiltrate information. The easiest way was of course to exfiltrate the information in the same way that I had obtained access to the box, which was through SSH and password reuse. I didn’t identify any other methods of exfiltration during the assignment. This was of course not the most ideal way out, since it required passing the information through multiple infected hops in the network which could attract some attention from the people in charge of defending the network.

A more elegant way in my opinion would have been to directly exfiltrate from the machine itself and avoid having a continuous connection to the machine from within the network. In this post we are going to explore the solution I found for this challenge, which is to repurpose the well known quantum insert technique to attempt and build a bi-directional communication channel with spoofed IP addresses to be able to exfiltrate from these type of isolated hosts. If you are thinking ‘this only works if IP filtering or anti address spoofing is not enforced’ then you are right. So besides the on going DDOS attacks, this is yet another reason to block outgoing spoofed packets.

If you are already familiar with IP spoofing, forging packets and quantum insert you can also skip the rest of this post and jump directly to QIBA – A quantum insert backdoor POC. Please be aware that I only tested this in a lab setup, no guarantees on real world usage :)

Lastly as you are probably used to by now, the code illustrates the concept and proofs it works, but it’s nowhere near ready for production usage.

END_OF_DOCUMENT_TOKEN_TO_BE_REPLACED

Errr ok, so the “NSA-style content searching” might be a bit overrated then again it’s usually only the intelligence agencies which perform this type of bulk searches as far as I know. Anyhow, here is an idea on how to abuse Google DLP (available in google apps for work) to perform exactly the same, since it recently incorporated support to also perform OCR on the emails / attachments:

According to this screenshot it seems that you can also perform DLP actions on incoming items: 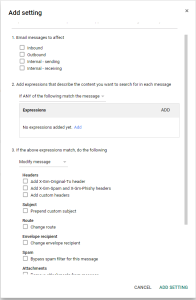 Which is what enables us to perform specific content searches on all incoming email messages and prepend  certain keywords to the subject. Now imagine you just hacked an organisation and added a rule to the exchange server or individual outlook instances to forward all email to an email your control and has DLP enabled with all the keywords, hashes or rules you need to only get the juicy contents out? Don’t forget to delete the forwarded message with a rule ;) The types of content matching that you can perform is also pretty flexible:

Based on the DLP trigger you can then just rename the subject and use google rules to forward the message to another inbox or leave it there and just organise it into folders. Kinda saves you as an attacker a lot of time, since normally you’d have to perform or implement OCR / content matching yourself. Added bonus is that since it’s already been stolen from the victim company it doesn’t really matter what you do with it as long as the original sender doesn’t receive some weird Google notification.

You might be thinking “my client will never allow this”, but what if your client is already connected to google apps for work?

As a final thought you could also use this for defence purposes if you are already working with Google apps for work as an organisation. You could use the Google DLP feature to feed it the currently hyped ‘threat intelligence’ file hash information and block different known threat actors if their tools & techniques remain the same for a period of time.