ok :| WOW sometimes the gadgets and toys you see in a Hollywood show REALLY are THAT easy to build. I’m talking about the home made taser gun, made out of a disposable camera and I first saw it on Burn Notice.

So I previously blogged about a laser alarm system I’m working on. I’m still stuck with it…although today a colleague of mine came up with a funky idea to turn the alarm on/off but I’ll blog about that when it’s finished. So getting back to the homemade taser gun. I saw a episode of Burn Notice where they quickly make such a device out of a disposable camera…and guess what tonight I just made one myself. It only took me like 2 hours or so(mainly cause I’m still a noob when it comes to soldering stuff).  How to build it is explained in the book I mention in the previous article…but it can also be resumed to the following:

Now that wasn’t that hard was it ? I mean like WTH!!! Additionally you could make it all look more slick and stuff…but the above will do just fine for testing purposes. Here is how mine looks like currently: 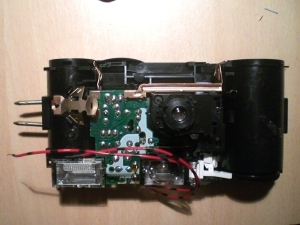 The spikes you see on the left are just to make it look more like a taser gun. Now this is wicked stuff. I never imagined hardware projects could be done so fast and actually have them do what they should do! For the curious ones:

NO I AM NOT GOING TO TEST THIS ON A HUMAN BEING!!!

The only way I am going to test this is by measuring how much distance there is needed between the cables before a spark jumps over. The bigger the distance the bigger the shock. According to the book a 1.5volt battery delivers like 1000volt charge, that sounds pretty painful to me.

oh and  a disclaimer:

7 thoughts on “Burn Notice toy…is really THAT easy to build!”